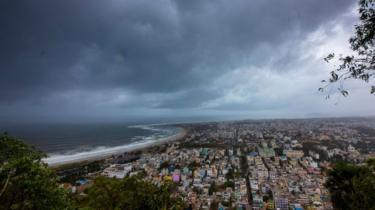 Thousands of people are being evacuated from villages along India's eastern coastline ahead of a severe cyclone.

Cyclone Fani is heading towards the state of Orissa with wind speeds in excess of 200 km/h (127 mph), and is expected to make landfall on Friday.

Officials have now shut down operations at two major ports on the east coast, and thousands of rescuers are helping people evacuate from low-lying areas.

Officials told BBC Hindi that around 800,000 people are in the process of being evacuated. Nearly 100,000 of them will be evacuated from Puri, a city in Orissa, as authorities believe that this is where the storm will hit hardest. Puri is also home to the 858-year-old Jagannath temple - officials are worried about the impact it could have on the historic building.

Meanwhile, all schools and universities in the state have shut.

Cyclone Fani will be the fourth storm to hit the country's east coast in the last three decades.