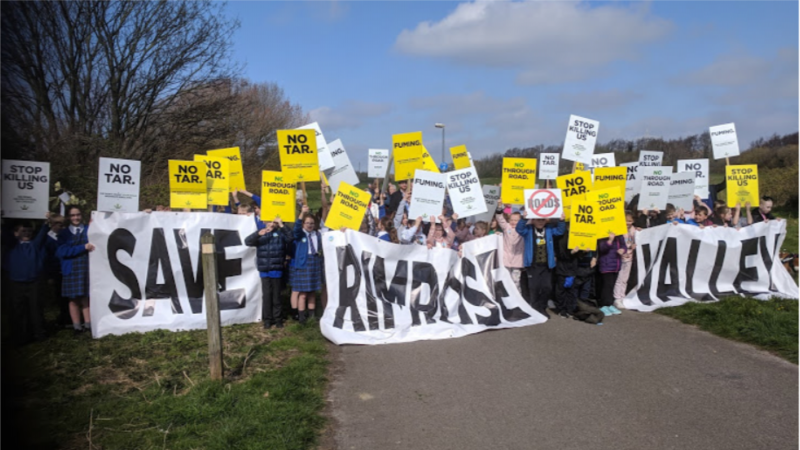 A vibrant community campaign on Merseyside is determined not to let the government build a road through their cherished green space.

Once used as a domestic tipping site, Rimrose Valley Country Park was reclaimed in the 1990s to create a natural recreation site. It now serves as an important green lung for the community.

The valley is used by children for walking to school or playing football, by families for picnics and by local schools for nature learning. Runners, cyclists and dog owners use the parkland on a daily basis.

It is a wild, green space, full of trees, in a densely populated and industrialised area of South Sefton. It includes two Sites of Special Local Biological Interest.

Despite all the earlier effort to re-green the valley, in 2017 Highways England (HE) announced that it wanted to build a dual carriageway bypass road right through Rimrose.

The agency says the road is needed to ease congestion on roads between the Port of Liverpool and the motorway network.

Traffic on local roads has increased significantly since 2016, when a new deep-water container terminal was completed. With the port's developed handling capacity, more heavy goods vehicles journeys are expected in the coming years.

The route through Rimrose Valley was chosen at an estimated cost of £250m.

The Save Rimrose Valley  campaign was formed in 2017 when the new road was announced.

The campaign team is made up of local people - mums, dads, teachers, and people with a wide range of skills. They all decided to give up their spare time to protect the valley for future generations.

"No consideration has been given to the huge impact this scheme will have on our environment, the wildlife in Rimrose Valley or the public’s physical and mental health," says Stu Bennett from Save Rimrose Valley.

According to Stu, options for shifting freight onto railways were never fully explored or presented to the public.

“More roads deliver more pollution and, on a much wider scale, contribute to climate change," he says.

Click here to read full story on Friends Of The Earth