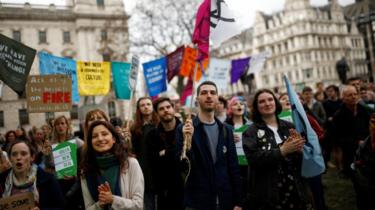 MPs have approved a motion to declare an environment and climate emergency.

This proposal, which demonstrates the will of the Commons on the issue but does not legally compel the government to act, was approved without a vote.

Labour leader Jeremy Corbyn, who tabled the motion, said it was "a huge step forward".

Environment Secretary Michael Gove acknowledged there was a climate "emergency" but did not back Labour's demands to declare one.

The declaration of an emergency was one of the key demands put to the government by environmental activist group Extinction Rebellion, in a series of protests over recent weeks.